What Is The Origin Of Antibiotic Resistance Genes?

As introduced before, penicillin-resistant bacteria were discovered in 1940 before the broad clinical use of penicillin in 1945. We think most people imagine that antimicrobial resistant bacteria would appear after antibiotics have been widely used. If that is true, how can we understand the appearance of penicillin-resistance bacteria? Do you think the existence was accidently discovered? Unfortunately, it took a long period of time to clarify the phenomenon.
As you know, recent developments in genomic sciences has been amazing us. They had already successfully sequenced the human genome completely and have been advancing to the next stage. Not surprisingly, the genomic science of bacteria has also made progress, the sequencing all genomes of many species of bacteria was finished and published. Along with the development of the genomic sciences, the mystery of antimicrobial resistant bacteria was unraveled.
The figure shows the data of vancomycin resistant enterococcus (VRE) which is a major cause of nosocomial infections on humans. VRE has various types, of which a) VanA and b) VanB are regarded as important. The vancomycin-resistant gene is composed of three genes. Both c) and d) as shown in the figure are parts of genome structures in vancomycin-producing bacteria, and also have the same three genes as well as the vancomycin-resistant gene. Thus, it means the root of vancomycin-resistant gene locates on the chromosome of vancomycin-producing bacteria. It is considered natural in the aspect of the maintenance of life to have protective abilities against their own production of antibiotics.
This fact means that antimicrobial resistant bacteria for any antibiotics which would be newly developed in the future have already existed on the earth. Using antibiotics makes antimicrobial resistant bacteria only select and increase, therefore, we need to use them with much care. 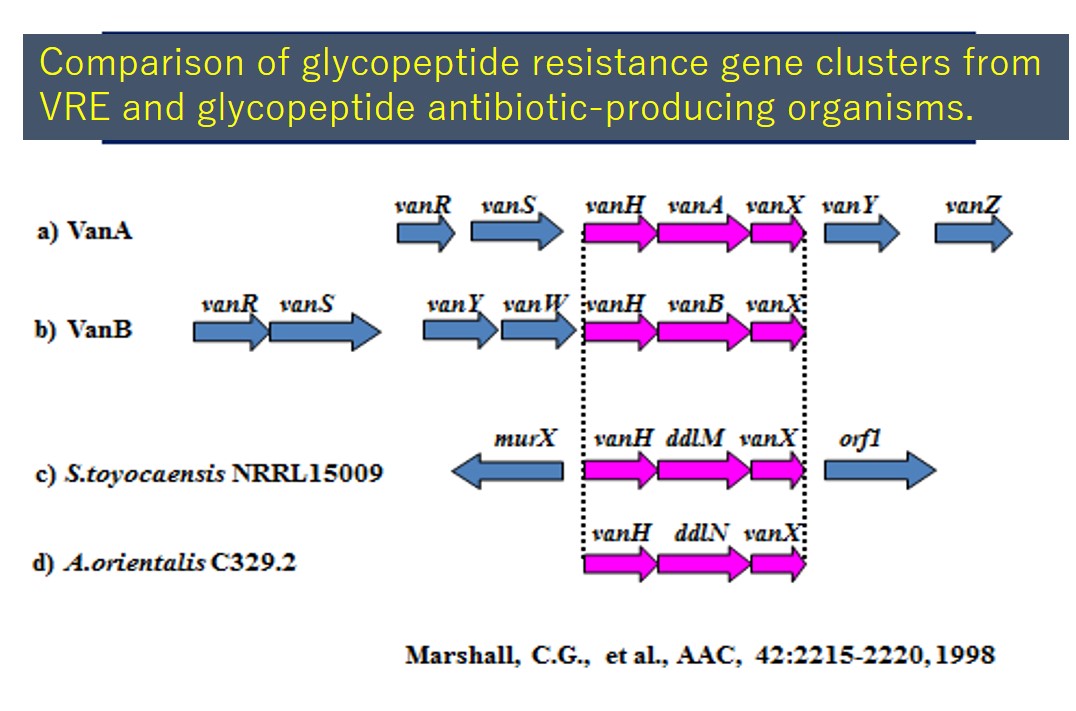